The benefits for international students of studying A-Levels in Cambridge

The UK has a world renowned reputation for its quality of its education. The qualifications offered by British schools, colleges and universities are recognised as hallmarks of excellence and distinction. 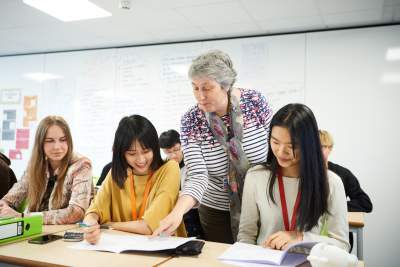 Advanced Level courses, known commonly as ‘A-Levels’ can be studied over two years or 18 months. Students are typically aged between 16 – 19 years on entry. They study 4 or 3 subjects. Grades are awarded from A* (Highest grade) down to E. A Level courses are the most commonly recognised qualifications for entry to UK universities.

One of the main benefits of studying A-Levels for international students is the freedom of choice that they offer. Most students study three or four A-Level subjects and there are no specific requirements on which subjects a pupil should study.  At Abbey College Cambridge we offer more than 20 A-Level subject choices covering a wide range of academic disciplines, which students can choose to study in any combination they wish.

A-Levels also allow students to focus on the subjects that really interest them, which they are passionate about, and which are more closely related to the courses that they want to study at university.

For Students who aren’t quite sure about their future plans, A-Levels give them the option of maintaining a wide breadth of subject choices, such as studying a humanities subject, combined with maths, a business related or science subject, and a language.

Although A-Levels give students options to maintain breadth in their studies, the focus is narrower than other courses such as International Baccalaureate (IB). Focusing on three or four subjects at A-Level, as opposed to the six studied at IB, gives students and teachers considerably more time to explore a subject in real depth. So A-Levels are also a great choice for students who know which subjects they are passionate about, and who have a good idea of the types of undergraduate courses they might want to study at university.

A-Level students also benefit from several free periods each week, which are given over to self-directed study, where they can complete reading and research tasks set by teachers, formulate ideas and explore areas of personal academic interest within or related to the subjects that they study. This helps to prepare for future study at university, where learning itself is more self-directed.

As mentioned above, A-Levels are also the most common route to entry to UK universities. So this means that university admissions officers thoroughly understand the A-Level subject syllabus, and it could be argued that studying A-Levels gives an advantage to international students looking to join a competitive course at a top ranked UK university.

Entry to UK universities is administered through the Universities and Colleges Admissions Service (known as UCAS). UCAS converts A-Level grades into points. The higher the grades, the greater the number of UCAS points a student will be awarded. Depending on the course, a university may also require a student to have studied a certain combination of A-Level subjects, and require students to achieve specific grades in certain subjects to be considered for entry

A typical university requirement to study a competitive subject, such as Medicine, might be A*, A, A, for a student studying A Levels, or a combined total 40 points for an IB student. This would require the IB student to get at least a 6 in most of their subjects, so the student who is specialising in only three A-Level subjects, particularly ones that interest them, receiving dedicated and personal support from their subject tutors, will be at an advantage.

A-Levels are also recognised by universities all over the world, including those in America, Hong Kong, Australia, and Europe.  Every year, a number of DLD College London graduates choose to pursue their undergraduate studies outside of the UK, with universities in the United States of America being a particularly popular choice.

Why should I study A-Levels in London?

Cambridge is home to the University of Cambridge, consistently ranked as one of the world’s best universities. Basing yourself in Cambridge mean’s that you will be able to access lectures and materials provided by the university which are delivered by some of the foremost experts in their fields.

Cambridge is also an inspiring academic location, being located in the city for 25 years, Abbey College Cambridge is able to give students access to the universities departments and facilities, and we often arrange talks and visits to the college by university lecturers and admissions tutors.

This means we are incredibly well placed to stay on top of the latest developments in the A-Level curriculum and the skills and knowledge required to achieve top grades and progress to top UK universities.

As an internationally focused college, we also understand the importance to international students of improving their English language alongside their academic studies. That is why at Abbey College Cambridge we offer an Academic English programme for all A-Level students who do not speak English fluently, or who are not native English speakers.

These English classes are offered at no extra charge, and are vital in helping our international students to improve both their A-Level grades, and to achieve the qualifying English score for the most competitive university courses.

Studying and living in Cambridge also offers wide ranging academic and extra-curricular learning opportunities, our students have the resources of one of the world’s most prestigious university cities on their doorstep, and our college organises regular trips and activities within the city and University of Cambridge to take advantage of them.

We also offer an extensive university preparation programme, which is tailored to fit the ambitions of each individual Abbey College Cambridge student. This will include support and advice with university and course selection, and the preparation of student’s personal statement. Preparation for university entrance tests and mock interview practice, and assistance with sourcing work experience for students within the fields they wish to study.

The UK is also home to many world-class universities. Abbey College Cambridge has built relationships with top universities, and our graduates have progressed to universities such as the London School of Economics and Political Science (LSE), Imperial College London, University College London, Durham and King’s College London. So we are well placed to offer A-Level students access to these prestigious institutions, and we often receive visits from university professors to deliver lectures and advice to students who wish to study with them.

Cambridge has also been consistently voted as one of the best places in the UK to live and work. Many Abbey College Cambridge students move on to study undergraduate and postgraduate courses at Oxbridge colleges and many other top universities, after which they take up work with UK-based multinational companies. The city is also well connected with the rest of the UK, Europe, and the world, making a great hub for internationally focused businesspeople.

Cambridge is also a multicultural city, with a great cultural and social scene. Cambridge is also one of the UK’s most beautiful cities, renowned for its museums, parks, galleries, and music venues, so there is always something to keep students entertained.

Study your A-Levels at Abbey College Cambridge and success awaits!