Although the new school year in the United Kingdom traditionally starts in September, many schools and colleges now offer an additional entry point in January.

January start courses are intended to allow international students from countries whose academic year doesn’t sync with the traditional school year the option to study in the United Kingdom without having to defer their studies to the next academic year. For example, school years for many countries finish in November. This is too late to join in September, but having a January start option means students can still realise their dream of studying in the United Kingdom.

If you are considering joining a January start course at a British school or college, there are some considerations to take into account and questions to ask before you jump in.

The first question to ask is what courses and subject combinations are available if you start your studies in January? Some colleges may offer a limited range of programmes and subjects to their January start students. So you may be able to join an A Level or GCSE course, but remember to confirm that the subjects you want to study are actually available. Here at Abbey College Cambridge, we offer nearly all of same  subject options for our January that we offer for September start courses. This means that our January start students have the widest possible subject choice, and that they are free to choose the combination of subjects that most interests them, and which will provide access to their first choice university course.

Most January start programmes offered by British schools and colleges are also ‘condensed’, meaning that students who start an A Level or GCSE Programme in January will finish their studies at the same time as those who started the previous September. What does this mean? As a January start student the first two terms of your studies are likely to be quite intense, your settling-in period will be shorter, and you’ll have to hit the ground running. 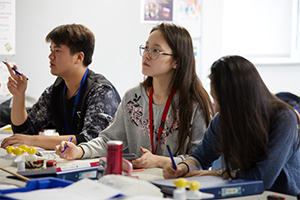 Whereas to some extent this can’t be avoided, it is still important to ask the school or college you are applying to what measures they put in place to support January start students. For example, here at Abbey College Cambridge we organise additional ‘catch up’ classes and tutorial sessions to help get our January start students up to speed, and our we also ask our January starters to have slightly shorter holidays in the first two terms of their studies, and we use this time to run extra classes.

Some colleges might also ask international students starting their course to achieve a higher level of academic performance, or a better level of English for entry to January start course than they would for their September start students. At Abbey College Cambridge we don’t increase entry requirements for our January GCSE and A Level students as the additional academic support we offer enables our students to effectively ‘bridge the gap’ and begin their second year studies at the same level as those students who started with us in September.

Another good question to ask is how the college helps students starting in January to integrate and settle into college life. Does the college organise the students into their own class? Or integrate them with students who started in September? likewise do they board together with other January start students? or with the wider student population?

Here at Abbey College Cambridge, after a short induction, we integrate January start students with those who began studying on the course in September. January start students attend the same classes and living in the same boarding houses as September start students, with additional academic and pastoral support. We believe that this helps them to settle in to college life quickly and more fully, factors that are key to ensure our students’ academic and personal development through their studies. We also offer a programme of Academic English lessons and tutorial session which take place alongside the academic programme, this helps January start students to quickly and effectively improve their English language skills, which are a vital contributor to academic success and wellbeing for international students. 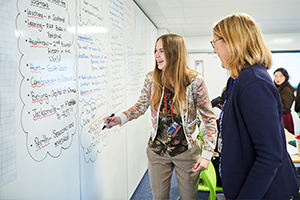 It is also worth considering is how the college will be able to support your university application. At Abbey College Cambridge we ensure that our January start students are not disadvantaged in this respect by starting our Pre-Degree Diploma university preparation programme for all students in January.

We believe that a January start course is a great alternative to consider for international students who are not able to join a British school or college in September. Make sure to do your research and choose the college and course that fits your personality and academic ambitions and were sure you will have a great time, make lots of friends and achieve top results!

Want to know more about starting your studies in January? Then join our January start information webinar hosted by College Principal Dr Julian Davies on Thursday 22nd October at 1oam BST. Simply click on the image below to register.